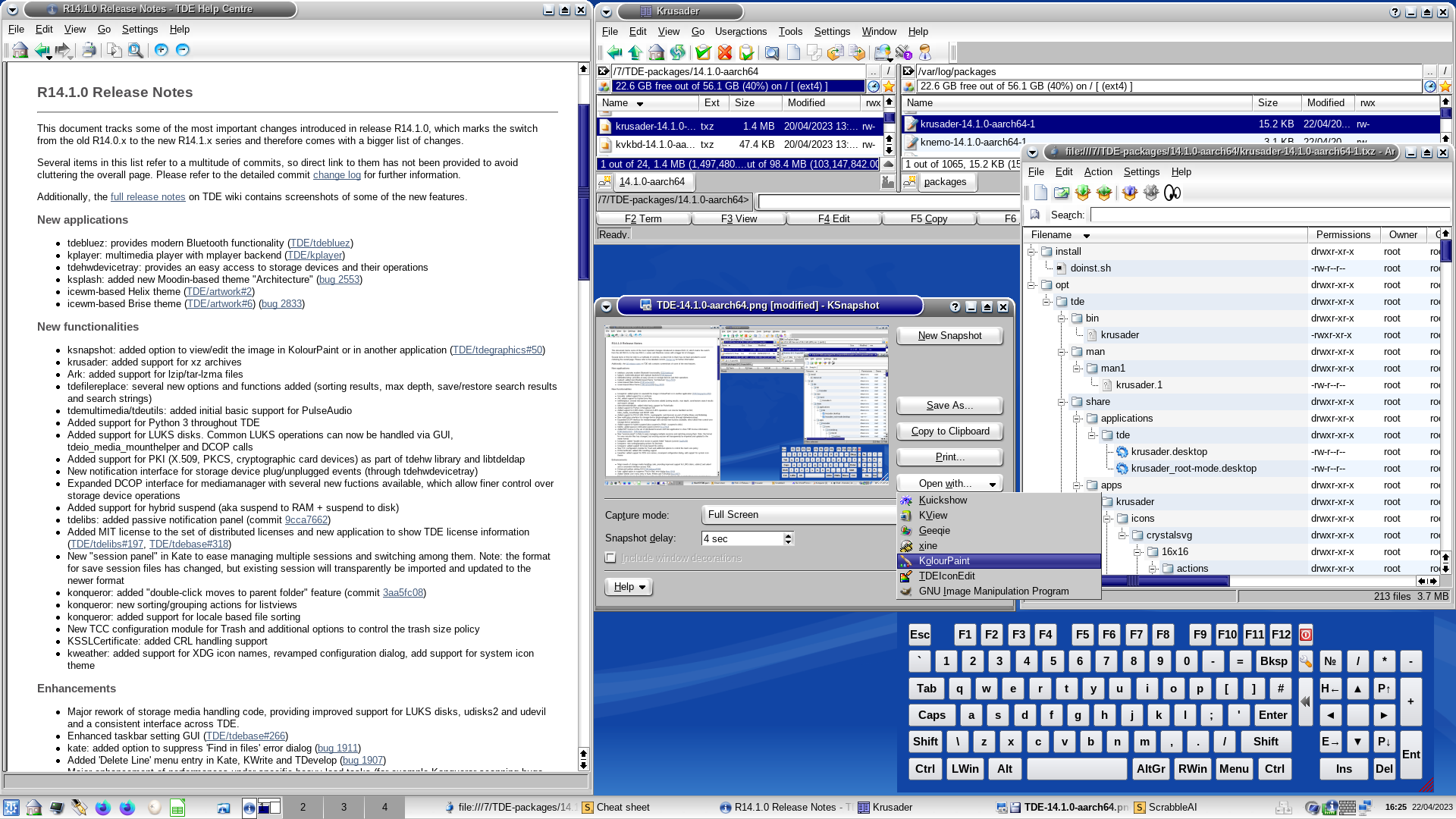 The Required packages will need to be installed as they are built, because they provide dependencies for other TDE packages.

Any package, or set of packages, can be selected in the 'TDE Packages Selection' screen.
Information about dependencies for some packages has been added at the bottom of the dialog screen.

14.0.13 source archives will be downloaded from a geoIP located mirror site, or the development sources [14.0.x/14.1.0] cloned or updated from trinitydesktop gitea.
Downloading can be done pre-build [useful for an off-line build], or during the build.

If you're curious about what this might involve, take a look at a sample build set up.

Command line options that can be used to set some build parameters:

The directory structure for the SlackBuild scripts is in line with the Trinity release source repositories:

There is an override in the Misc SlackBuilds for non-trinity source archive URLs. Non-trinity builds have been included where a TDE package requires a dependency that is not in Slackware, or where it's an alternative to a TDE package.

Some SlackBuilds require non-Slackware packages which aren't in the build list. These can be added to the build if they are not already installed by downloading the source archives to the 'src' directory. They will then be built and installed during the xxx.SlackBuild.
See the READMEs in Core/tdeedu, Apps/k3b, Apps/klamav, and Misc/inkscape for details, which can also be viewed while running ./BUILD-TDE.sh.

Required packages for a basic working TDE are:

The newly introduced cmake-trinity package for R14.0.11+ is downloaded with the first archive, usually tqt3.

i18n support [locale and html/help docs] in the packages is restricted to whatever is selected in the ./BUILD-TDE.sh 'Select Additional Languages' screen and, of that, to whatever is available in any individual package source.

Translations for the .desktop files are determined from the LINGUAS variable which is set in this build shell to the additional languages selected.

There is an option in tde-i18n.SlackBuild to include a user created language specific patch file in the build.
It needs to be named tde-i18n-{lang}-patch and will then automatically be included for the build for that language.
Because of its position in the Slackbuild and the patch -p0 option, the path to the patched file must start with 'tde-i18n-{lang}' - see tde-i18n-en_GB-patch for an example.

The build is set up to clone the individual TDE apps from trinitydesktop gitea - except for individual language packs of tde-i18n. The whole tde-i18n download is ~1x10^6 bytes, so to reduce that, wget is used to download individual tde-i18n-$lang packs as they are not git repositories.

Once any git repository has been cloned, further downloads are updates only[2], giving the best options - only fetching what is needed, and incremental updates.

The git repositories are cloned to 'src/cgit'

Cross compiling a number of packages for the Raspberry Pi3 based on these scripts is detailed in the html page in the gh-pages branch:

which can be viewed online.

[1] TDM may need some manual setting up - see Core/tdebase/README, which can also be viewed while running ./BUILD-TDE.sh if tdebase is selected.

[2] The i18n downloads with wget can't be updated because cgit produces 'current time' timestamps. The consequence is that if tde-i18n-$lang is a part of the build after its initial download, it will be downloaded again. As updates are infrequent, once built, there will probably be no need to do so again and so tde-i18n for a particular language will probably only be run once. On that basis I don't see this being a significant issue.

[3] The Misc directory contains SlackBuilds for software that might already be installed from other sources. Please check because any misc builds selected here could overwrite them.

[4] The README for a native build for Raspberry Pi3 is out-of-date and cross compiling is a better option.